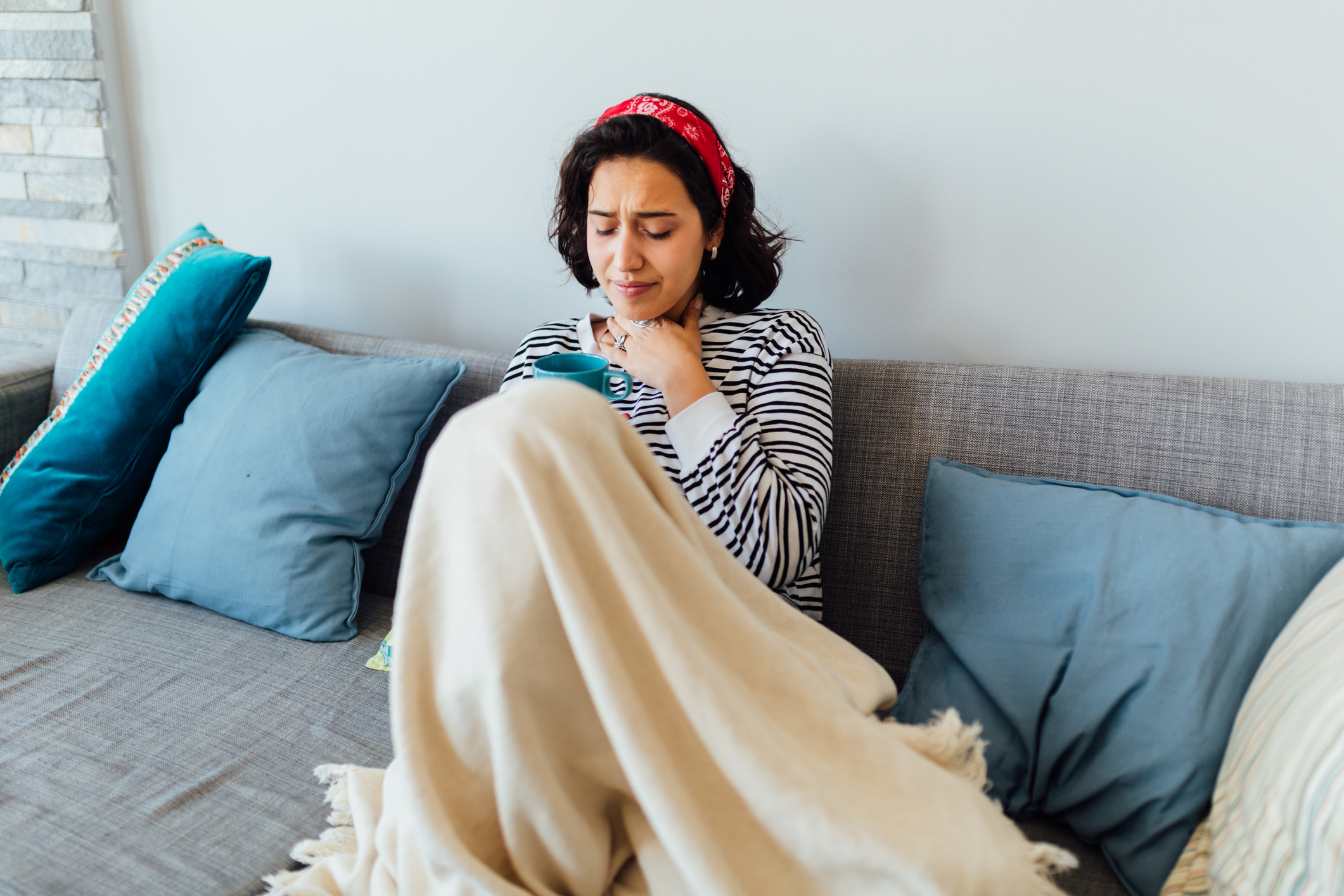 Common among teenagers and young adults, glandular fever is an infectious disease caused by the Epstein-Barr virus (EBV). Although not typically a serious condition, coming down with glandular fever can be an unpleasant experience, with symptoms including a high fever, a painful sore throat and swollen lymph nodes.

So, what causes this virus? What are the best ways to treat the symptoms of glandular fever? And how long are you contagious for when suffering with this ailment? To answer the most pressing questions relating to this condition, Ultra Chloraseptic have put together this handy guide.

What is glandular fever?

As mentioned previously, glandular fever, also known as mononucleosis or ‘mono’, is a contagious infection caused by the Epstein-Barr virus. Also informally referred to as the ‘kissing disease’, it is passed from person to person by close contact – this includes not only kissing, but also less intimate contact such as sharing cups, bottles and cutlery.

Symptoms of glandular fever, as we will explore in greater detail below, typically present themselves in the form of a sore throat, high temperature, swollen lymph nodes and general physical tiredness. While the first three listed symptoms usually pass after two to three weeks, ongoing fatigue can last several months. However, all of these symptoms can usually be relieved through the use of over-the-counter painkillers, throat sprays, drinking plenty of fluids and bed rest.

Interestingly, this condition most commonly affects teenagers and young adults and has an incubation period of up to six weeks, meaning it can take more than a month from the moment a person has first been infected with this virus for symptoms to appear.

Are glandular fever and mono the same thing?

Yes – glandular fever and mono both refer to infectious mononucleosis.

Although a small number of glandular fever cases are caused by other viruses, the vast majority are caused by the spread of a virus known as Epstein-Barr. This virus is commonly transferred through bodily fluids, but can also survive on surfaces for a short period of time. While most people are exposed to EBV as children, this does not necessarily mean that you will ever contract glandular fever. Indeed, you can carry EBV in your body your entire life without ever experiencing glandular fever symptoms. Interestingly, EBV infects more than 90 per cent of the human population, while only around 50 per cent of this number develop glandular fever.

What are the symptoms of glandular fever?

While some people infected with EBV do not develop glandular fever symptoms, if the infection does develop, you can expect one or a combination of the symptoms listed below.

A sore throat is the most common symptom of glandular fever. Although this can be a symptom of a range of illnesses, a sore throat caused by mononucleosis will typically  last longer than usual and cause swelling that can make it difficult to swallow. Saliva pooling in your mouth can also occur.

When your body’s immune system is fighting off glandular fever, your lymph glands tend to swell. While any lymph gland in the body can be impacted, glands located in your neck are most commonly affected, becoming enlarged and sensitive to the touch.

As with a range of viral infections, from seasonal flu to COVID-19, mono can cause a high temperature, muscle ache and headaches.

Although not as common as other symptoms, swelling or puffiness around the eyes occurs in around one in every five people with glandular fever.

A feeling of intense tiredness, often referred to as malaise, presents itself in patients with glandular fever. This symptom tends to last longer than others, sometimes continuing for several months.

In most cases, symptoms will settle and improve over the course of two to three weeks. However, in a very small number of cases, rare symptoms do occur. These include:

EBV can cause mild inflamation of the liver. While this usually clears up without causing any obvious physical symptoms, it can in very rare circumstances cause yellowing of the skin known as jaundice. If this occurs, seek immediate medical attention.

Some people with glandular fever experience a widespread, non-itchy rash. This is a sign that your immune system is fighting the virus.

In some cases, glandular fever can cause the spleen to swell. Located on the left side of the abdomen, a swollen spleen can make this area of the body feel delicate and sore.

As mentioned above, lingering feelings of general tiredness is a common symptom of glandular fever. However, in a small number of cases, extreme post-viral fatigue and feelings of depression can also develop. Although this usually clears in time, you should visit a doctor if this continues for a prolonged period.

How to treat glandular fever

Currently, there is no known cure for glandular fever. However, there are a range of ways to treat the symptoms you may experience. These include:

Tiredness and flu-like symptoms are common, especially during the first two weeks. For this reason, plenty of bed rest is recommended.

As with many viruses, glandular fever can cause dehydration, especially if you are also experiencing a high temperature. Drinking plenty of fluids, even if you are struggling with a sore throat, is essential and can help relieve other flu-like symptoms such as headaches and muscle aches.

Over-the-counter painkillers, such as ibuprofen and paracetamol, should be taken to reduce pain and keep your fever at bay. Additionally, local anaesthetic throat sprays, for example Ultra Chloraseptic’s Honey & Lemon Throat Spray, can be used to relieve the pain of a sore throat.

Now that you know what glandular fever is and what the symptoms of this virus look like, below we have provided answers to some of the most common questions about this illness.

Is glandular fever an autoimmune disease?

Although glandular fever is not in itself an autoimmune disease, research suggests that EBV may have links to illnesses that can affect people’s immune system, causing it to malfunction many years after the original infection. Indeed, links have been made between the development of systemic lupus and other chronic autoimmune illnesses and EBV, however, exactly how these links manifest themselves is still unclear.

Can you get glandular fever twice?

Generally speaking, glandular fever will only affect you once. While it is technically possible to experience symptoms on more than one occasion, this is incredibly rare. EBV may reactivate on numerous occasions in your life, but it will usually only cause symptoms once – typically when you are between the ages of 13 and 40.

How long does it take to recover from glandular fever?

In most cases, a patient will recover from glandular fever within two to three weeks. However, as touched on above, some people may experience general feelings of tiredness for a few months after being diagnosed.

Can glandular fever flare up again?

Just as it is rare to experience glandular fever twice, it is unlikely an individual will develop secondary flare ups of mononucleosis symptoms after an initial infection.

While glandular fever usually affects young adults, it is possible for people of all ages to catch the infection. Most EBV infections are believed to occur in childhood with little to no mononucleosis symptoms. However, glandular fever in children is still possible, and this may be similar to glandular fever symptoms in adults.

If you suspect your child may have mononucleosis, it’s important to consult a doctor to rule out other potential causes of their symptoms.

Mononucleosis is a contagious disease, mainly spread through direct contact with the saliva of an infected person while the virus is active, or through sexual contact. If you think you may have glandular fever, it’s best to avoid sharing cups, plates, cutlery and bottles with others – this should reduce the risk of passing on the virus.

The good news is that glandular fever isn’t passed on through simply touching or being near an infected person. Taking the appropriate precautions while a person is contagious should prevent mononucleosis from spreading.

Here are some other things you should avoid if you think you may be contagious:

How long is glandular fever contagious for?

Those with glandular fever are contagious during the entire incubation period, which is typically between four and seven weeks after infection, as well as while symptoms are present. In some cases, patients have been confirmed as still contagious for as long as 18 months after first being diagnosed with the infection.

Can you have glandular fever without a sore throat?

Although a sore throat is a telltale sign of glandular fever, you can still have the virus without experiencing this symptom. Indeed, an infection may be present without any symptoms. However, in most cases, one or more of the symptoms listed above are present.